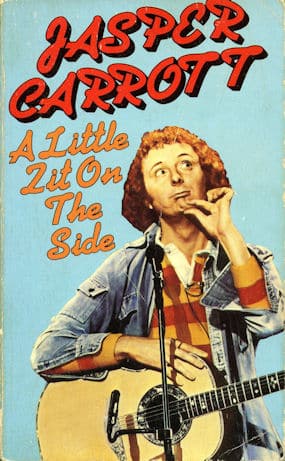 Taken from the book:

‘A Little Zit On The Side’ by Jasper Carrott

(Now out of print, sadly, but still available on places like Amazon)

(Note: The posts were based on line numbering from a print-out, as this can vary from pc to pc I’ll put an extra line break where every fifth line ended on my printed copy and the line number in green, like this 5.)

Even worse is the nutter in the driver’s seat. Especially
in the form of my mother-in-law. Now I’ve nothing against
women drivers – they’re just like any other normal psychopath!
My mother-in-law drivers but she hasn’t passed her test.
She’s being driving since before the war and has gone through
5.
twenty three tests which is an all-time record for Warwickshire.
People told me about her driving but I never believed
it. I thought it was being exaggerated. They say that you only
take her out once as the qualified driver. She knows the
Highway code back to front, but she has a mind that cannot
10.
relate to why she’s got to learn things.
The Highway Code states: "You look into your rear-view
mirror and then you pull out."
So far as she’s concerned it doesn’t matter what’s actually
coming. once she’s looked into the rear-view mirror and obeyed
15.
the instructions, then it’s safe to pull out
She never changes down gear. The gear-stick to her is something
for pumping oil into the servo-brake system.
We were going up a hill, in top gear, doing something like
eleven miles an hour. The car was juddering so hard I thought
20.
it would never last.
With two inches to spare we made it to the top.
Then, she slams the car into second gear and roars down,
passing everything that’s passed us on the way up.
She’s been driving for forty years but has never had an
20.
accident.
She’s seen hundreds.
Whenever I’m with her in the passenger seat – which is very
rare – I try and jolly her along: "You’re a very good driver,"
I tell her and this seems to stop her aiming the car like a
30.
bullet at the other traffic.
But it didn’t work recently. As I was congratulating her for
the umpteenth time on keeping a straight course down a main
road I vaguely noticed that some car had pulled up about half
a mile ahead.
35.
Suddenly, she slams her foot on the brake and I’m almost
through the front window.
"What’s the matter? What’s happening?"
"It’s him," she says, pointing to the distant car. "He
didn’t signal"
40.
Then she potters along, winds her window down and demands:
"What the bloody hell do you think you’re doing?"
The guy, who by this time is about to enter his front door,
is summoned by my mother-in-law. He walks over inquisitively.
"Road hog. Menace. Signal when you stop… it’s in the
45.
Highway Code… people like you should take their test
again… how dare you use the same road as me… you’ll cause
an accident before long…"
Then, as I crawl from under the front seat to make sure the
bloke isn’t taking offence, she slams the car into third gear
and then we go kangarooing on our chaotic way.