Gesticulation is the grammatical equivalent of contextual narrative and so finds a place in this project. I am covering this first as physical actions play an important part in any comedians’ routine, but are not readily apparent on the taped version*. Generally speaking, it can be found in three ways. Firstly, by actually seeing the show (which I have), secondly by listening to the background sounds on the tape and finally by imagination – the gestures that you imagine as being probable at any given point.

*(I wrote this back in 1991, before the Internet, long before Youtube)

I shall only cover the gestures that appear in the written version, found in appendix D. The first of these (D,20-21) reads,
"The car was juddering so hard I thought it would never last."

This is preceded and followed by head nodding to make the jolted sound you hear at this point.

The 1981 version however, (C,52-54), reads:
"The car is gonna fall to bits. We’ll never get to the top of the hill. Hail Mary, Mother of God…."
and the whole delivery is punctuated by vigorous head nodding to achieve the audible effect that could never really be produced in script.

Next, in line 23 of Driver-In-Law (D), he simply writes that the car "roars down," but in the live shows at this point (B,53) (C,58) he actually makes the roaring sound <6>,<4> – and punctuates it by making the gesture of some manic grandmother with a death-grip on the steering wheel.

The final three of the written version (D,34-35, 36-37, 39) only occur in the ‘Beat the Carrot’ tour of 1981 (C). Briefly, in the book he says that he
"vaguely noticed that some car had pulled about half a mile ahead" Then, "she slams her foot on the break and I’m almost through the window screen," and finally, " It’s him, she says, pointing to the distant car."

Contrast this with lines (C63-68) of the transcript.

"We are the only car on the road (1) and she hits the brake. WHONK. I am ‘WHOOAH.’ Nose job on the windows screen <5>. I said, ‘What the hell d’ja do that for?’ She sez, ‘It’s him, the road hog.’ About a mile up the road, a bloke had pulled up outside of his house without indicating."

Firstly the running order is changed and, more importantly, each sentence and gesture is followed by at least three seconds of laughter. The part about breaking is followed by "WHONK" and is punctuated and emphasised by him stamping down hard on the stage. 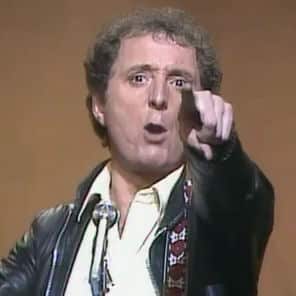 The blown raspberry (<5>) is dramatised by squashing his nose to show the apparent damage done. Finally, as he says, "It’s him, the road hog," the text information is preceded by him pointing accusingly ahead to represent his mother-in-law, then shielding his eyes with his hand and squinting into the distance to try and see the "him" in question.