General discourse, communicating directly with the audience, is what makes or breaks a comedian. If you read a humorous sketch – such as ‘Driver-in-Law’ – it is not the words themselves that make you laugh, but the images that they conjure up. In the book form this is somewhat restricted. You can indicate stress with the use of italics, or use bold to emphasise harsher speech, or comment on the type of voice used directly, but that is about all. Accents, for the purpose of this thesis, can be considered as any voice – other than his normal tone – used for effect. 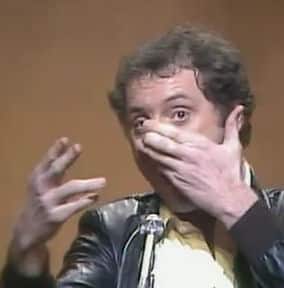 A prime example is shown in (D,38) where the question, "What’s the matter? What’s happening?" reads more as a query, as if looking around to see the problem. However in his act (C,65) "What the hell d’ya do that for?" conveys a completely different meaning. The voice used here immediately indicates pain as well as annoyance and conjures up the image of him holding a tissue to his bloody nose.

This is equally true of the other occasions where he uses different accents to show feelings such as embarrassment (B,38-39), "Hi there, ha ha. Mother-in-law, ho ho."

Also to indicate another character – such as the strangulated demand of, "WHAT THE HELL’S GOIN’ ON HERE?" in (C,81-82). The importance of this is that these voices are invariably followed by laughter.

The only time really that laughter does not follow immediately is in (C,52-59).

"<3>… The car is gonna fall to bits. (.) We’ll never get to the top of the hill. ‘Hail Mary, Mother of God’. People were driving by, going, ‘What the hell’s going on?’ <3>… ‘Hello there. Mother-in-law…’ and we finally got to the top of this hill with about two inches to spare and I thought, ‘thank grief for that,’ and she slapped it into second and <4> fourteen g-force on me face. ‘Woaarr,’ passing everything that had passed us coming up the hill. (*6)."

However, I believe that this is intentional as he does not really pause for a moment until his scream following, "fourteen g-force on me face." Then he gets a full six seconds of laughter.