Hordes of the Underdark

To be written up. Ask over the forums or email me for an instant answer.

Cautionary warning.
Anything you aren’t carrying on you after you free Halister and venture into the Underdark is lost. This includes anything you hoard in the ‘Gatehouse’ because you can’t find enough backpacks.

Where’s my stolen gear!?
It is in a black chest in a Drow camp, near some tents. 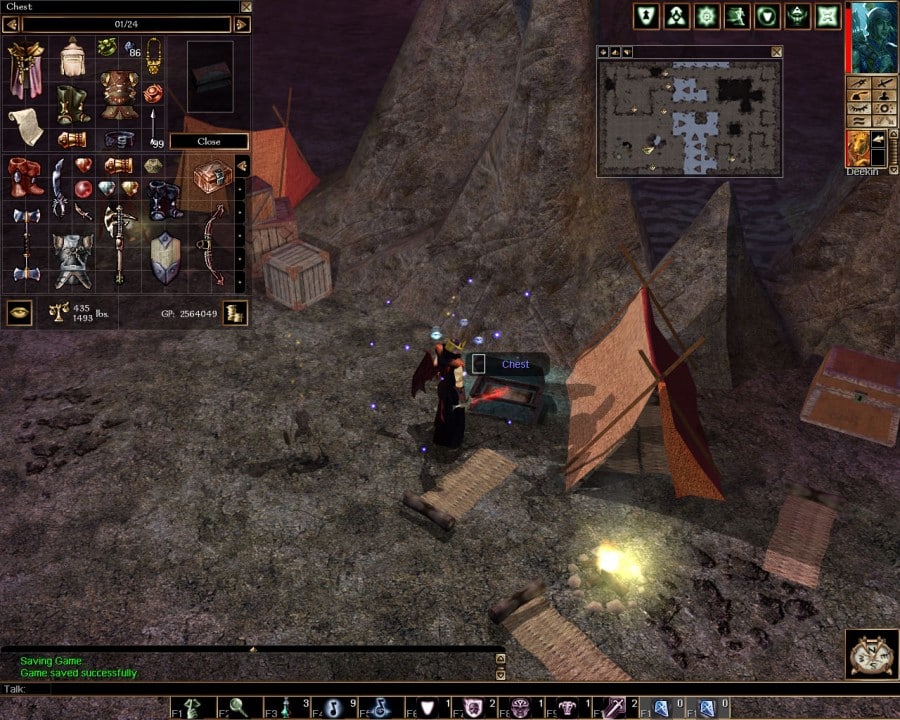 Ah, here’s the trick, which I consider NOT a cheat but fixing a flaw in the code…
Get everything out of the chest. Save the game, then open the chest. It’s full again, but of different items. Repeat this until the chest is truly empty.
Now, the first time around this was perfect. The second time, for some reason, it ate all but one of my bags. Everything to the last skeleton knuckle was returned, but I had nothing to put all the accumulated junk in!

*MUTTER*
Just looked at the screengrab I made (above). It seems you can always scroll the contents left and right instead to get them all. D’oh. The hours I spent, I wasted shuffling items from inventory and back. Darn it!

Incidentally, I’ve noticed this on a few mobs too. If the corpse doesn’t fade away it’s probably because you haven’t got everything.

What is the thing with Nashers gear?
I won’t spoil the fun of searching, but three of the four items are on merchants. If you want to get them all I suggest you don’t go all aggressive before you have them, eh.

The items consist of a cloak, ring, boots and gloves and, if worn as a complete set, at least doubles the enchantment on them while equipped.

Pearl of Tongues, Pearl of Bashing ~ How do I work the bridge control?

If you aren’t smart enough you can use the ‘pearl of tongues’ to help you open the bridge control for entry into the Beholder caves.

I admit the ‘pearl of bashing’ took me longer as I’d already solved that puzzle, but it is actually an ‘easter egg’ of sorts. 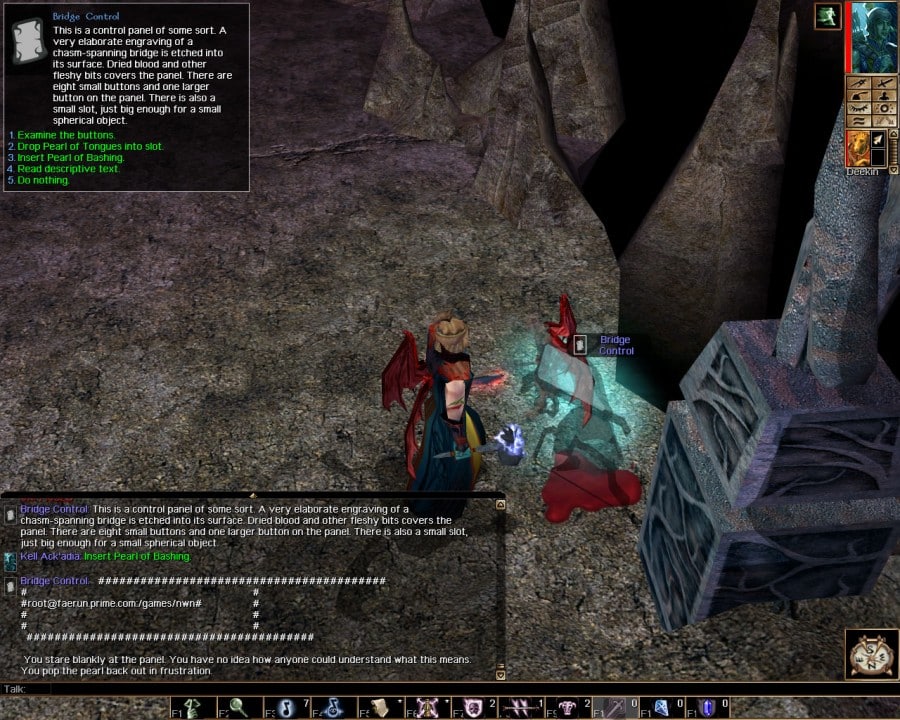 Illithid caverns of Zorvak’Mur
I’d advise you get the Helm of Shielding from the duergar as you enter the area.

Magic dead zone in the Beholder area
I can see this confusing a few people, but the clue is given at the base&:
Simply press the outer plates to match the (fixed) innermost one in each arm.

On the Island of the Maker

The clues are in the tomes, but if you are wondering what the heck to do in the ‘control room’, think digital LCD.

Observation for those with a high armourers skill, if you fight the adamantine golem you can have a bar of the metal… The duergar on the island do mention wanting some in conversation, but there’s no mini-quest there. I feel this is a GREATLY missed opportunity by the developers, even if selling the ingot only gave the cost and a hundred XP, especially while there’s only two bars in the game.

The lightning trap
The sling and bullets are the clue. Take out the magic mirrors before they discharge. You’ll find it is easy if you use the space bar to aim between shots.

Golem Construction Machine – Controlling Amulet
Another irritating point for me, and many others, if seems, Googling as I was for the solution myself…

It is to create a summonable ‘Shield Guardian’ to battle for you. Apparently you can only find the five ‘Golem parts’ for the Shield Guardian Golem if you are a level 5 Sorcerer or Wizard, or better.

AGAIN, I see this as a plot, scenario failing by the developers. Personally I think they messed up! Too late now, unless they read this and fix it in a patch, but here’s how I believe it should go:

Any class can see and get the items, but only the relevant characters can actually cast the spells on the device. After all, this is exactly how it worked for Eltoora’s tomes, and for a few others using the alchemists chests.

Given the duergar are scavenging for golem parts it seems to me ridiculous that (for those not wanting a personal war machine) there wasn’t a side quest to take the torso etc to Dahanna, giving say 100 xp for each part, or, perhaps, 500 or more for the complete shell. Tell me I’m wrong, Bioware!

Cania and Baator
This really is rather linear, but there are still a few pointers to considers. First off, I’d recommend NOT waking up the Sleeping Man until it’s time. Remember, amulets, potions and ioun stones, even shields etc can boost weak statistics to more usable levels, eh. Same for going on an unnecessary killing spree in the town.

Secondly, once you get the ring necessary to move forward in the game, I advice you to wear it all the time. From the off there are a number of chests and such you can only see when wearing it. Caveat: However, there are a few were the shifted nature of the ring means other chests are invisible to you unless you take it off…

Ice wall / barrier
Notice how you perhaps took a pasting when you encountered the first guardian, transformed as you were to a pixie and so forth. Well, now is the time to look at the sensei’s amulet again for inspiration to progress…
Oh aye, got you!
Easy when you know how, eh

Mimic
I laughed long and hard when I entered this place. The developers have a warped sense of humour.

Anyway, getting past the force field barriers – just keep taking the ring on and off to phase shift past them.

You can waste hours here running round in circles after the mimic and rats, but ultimately it will get boring and / or frustrating. Just lay a candy trail of the thrown gems to the center of the area and wait to throw the trigger. As ever save – just in case.

Puzzlers Sepulcher
Obviously the puzzle elements lies in the scattered switches. I won’t spoil all the fun (unless you specifically ask), but suffice as to say, there’s the white way to do this, and there’s the wrong.

Frost Giant castle
You can stop looking. At far as I’m aware there is no key to that huge door. Most annoying!

Name names!
Apparently the Gods never lie but, if you want to save first and experiment, the name of your one true love is – random. Ah. OK. Similarly so for the Sleeping man. Killed the sensei before setting off and found she’s ‘the one’?
Me, I replayed the level again, but you can just rewrite the stars in the heavens and load a save to find his soul mate is actually (now) Nathyrra, Aribeth, or even (if you are a lady) you.