« « Back to the Chaos & Conquest menu page

This is, in part, a ‘bee-in-my-bonnet’ post over a single episode. However, the game has far deeper and far more pervasive problems, only – unlike the one below which was an error – these are intentional fall under cognitive mind games (to part you with your money, to deliberately misleading, and others that may be due to professional incompetence. Together these solidify my personal view that they cannot be trusted.

It’s the little things that matter

I had a minor, but genuine issue, put a ticket in, and also went over to their support page on Discord, which is populated by several hundred pay-to-win players (a fair number of whom, as can be expected, are as toxic as they come) and a handful of staff.

I am not even remotely exaggerating, below is a typical, even mild comment from their Discord:

When they get together, they are more like this alliance, below:

Anyone who says anything remotely against the game is targeted by said trolls. Really, just do not bother. Put a ticket in and…

Here’s the basics of it. They have regular events, called Infernals. These always last two hours. Always. Generally, in fact for the vast majority of the time, they are unachievable unless you use a lot of resources or, ideally for them, BUY resources. For cash. Sometimes a LOT of cash, like tens, hundreds of pounds (euros, dollars, whatever) per event. And these events happen many times a week.

In this case I used (not bought) 3,000 warpstone (the game currency), worth well over £8.39 (offer is normally £9.99), to purchase 2 million ore resources to complete the event in the (normally) short time allowed.

But there was a bug, one I missed. It was their mistake; they admitted it was their mistake. Then said I should have known and they are keeping the money. All sales are final. Thank you, now **** off. (That was the feeling, not the actual or implied words, which are copied below for clarity).

As I reported in my overview of Warhammer: Chaos and Conquest, within a minute of playing this game, a trained (or even a lay) psychologist can picked up a large number of cognitive ‘tricks’ and manipulative forms of sales and marketing (including but in no way limited to behavioural conditioning, muscle-memory and trained responses), being employed to trick or push players into parting with resources and currency. Not to mention all those screen-filling sales pop-ups!

Moreover, a certain section of the gaming community is particularly vulnerable to these tactics and, regardless of their ability to afford it, can fall into spiralling debt due to addictive spending for it, and games like it.
[p.s. All sales are final, no refunds. /Slam]

Also, within minutes or hours of playing, the game rapidly moves from suggesting you spend £4.99 to £49.99, and then £99.99 offers. After that the offers can rise to “purchase limit 20”, ‘buy now while the offer lasts’, so is telling you could spend almost £2,000. Followed immediately by the next and the next and the next offer.

Regardless, it is fair to argue it was my mistake too, I should have paid greater attention to the timer, but in my defence, even if I had noticed it (which I didn’t), it is the sort of error that is normally hot-fixed. i.e. the timer would normally be immediately corrected, reducing in from 14-hours to 2-hours.

It is also fair to argue, my gains are the same and – had this been a 2-hour timer – I’d have been happy.

Losses are another matter, however, as, from my perspective, relative to the actual events, I am down 3,000 warpstone, which has an actually real-world cost attached to it, currently greater than £8.39 (and that as a one-off special offer).

(Resources are very easy to acquire, given time, warpstone is not).

Thus, while in some respects I am no worse off then I might have been, than I am, the facts of the case mean I am worse off by 3,000 warpstone. Their mistake cost me £8.39 worth of in-game currency. They have admitted it was their mistake. They are sorry. But they are keeping it anyway, thank you. Good day.

You can quibble or troll this all you desire, the point is they screwed up and rather than make it right, they choose to profit from my (and their) error. 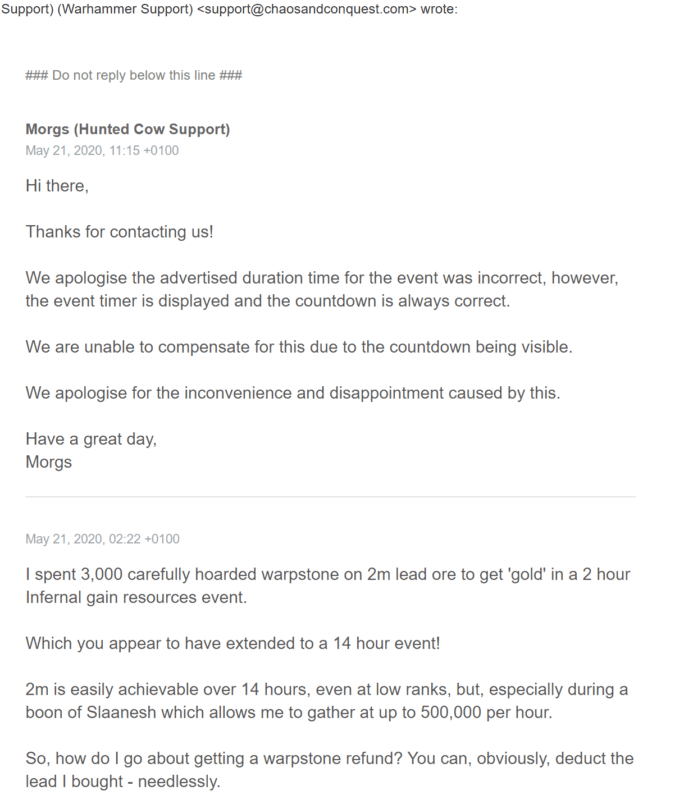 My reply to them is copied below. Morgs subsequent reply is copied in the addenda at the bottom. I expected to be either ignored, or fobbed off. Arguably I was still fobbed off, but in a very polite way. I understand his reply, better than he might image, but it doesn’t alter my perception of events. I have run computer companies, been the go-to guy for support; they are ways you handle things when you or your company mess up, and ways you do not. This, I personally, genuinely feel, falls into the later case.

Just so we are clear, ‘your game, your rules‘. If you (Hunted Cow / Tilting Point) make a mistake that, say, costs players actual financial loss, you get to keep the money. End of story.

Also, to be clear, if – whether by intention or accident – your in-game graphics – your adverts – are misleading, then caveat emptor applies – let the buyer beware, because you cannot be trusted.

It was 3,000 warpstone, it’s not a big amount, it can be regained. Trust however, once lost, is gone.

Congratulations on your decision.

The neanderthals of the game, as is their nature, trolled me and anyone else that complained, trotting out the usual lines: ‘popcorn time’, ‘buyers remorse’, etc. Were it their ‘whale’ purchases though, that would be different, eh. Have to keep the big spenders happy, no matter what?

As can be seen below, there is a clear conflict between what it says in graphics, in the advert, and the counter.

Above is an example of this in-game false advertising, and behavioural conditioning. The event is promoted as a two-hour (pay to win) INFERNAL, but the timer, bottom right, was incorrectly set. If you missed the mistake, they keep your money, you should have been paying better attention.

What you can take from this is this: Your pain is their gain. House always wins.

What is especially intriguing, and controversial, is this: As far as the game’s developers and its community are concerned, the error was wholly mine – according to them – as effectively verified by their support guy Morg – MY MISTAKE WAS IN NOT EXPLOITING A BUG IN THE GAME.

Normally, as almost any MMO gamer will tell you, using an exploit is a ban-able offence. In fact the publishers, Tilting point, are very clear on their view on the matter – following the in-game link to the Terms of Service, get read that:

“Violations of computing, system or network security may result in civil or criminal liability. We will investigate occurrences and may involve, and cooperate with, law enforcement authorities in prosecuting any user or users who are involved in such violations. You are prohibited from violating or attempting to violate the security and integrity of Tilting Point Services, including, without limitation, the following:
…
Using, developing or distributing any … offline reader, or any other cheat, exploit, mod, bot, hack or the like…

So, the publishers are telling us that if we use any exploit – ANY EXPLOIT – there will be consequences. While the developers, here, are telling me, “We messed up, the exploit was there for all to enjoy. It’s your fault for NOT exploiting the game.”

It is a matter of honour, and principle. I am down 3,000 in-game currently because I obeyed the rules and being mocked by players and the games developers alike for not abusing the error.

If, as it probably and logically seems, this was an accidental mistake on their part – one they have admitted – the right and honourable solution would have been to refund those affected. This would have showed good will and been positive PR. Also, as in in-game currently refund, it would have cost them nothing. Instead, Hunted Cow have chosen the “our game, our rules” path. NO REFUNDS! Followed by proverbially slamming the door in your face.

What we can take from this is if you miss-click, or if they, for instance, accidentally, they put a 2-hour timer on a 48 hour event, and you lose out after spending heavily, don’t bother complaining, you should have been paying better attention, “so deal with it”. All sales are final.

In my honest opinion, this game, their developers, and their publishers have demonstrated that they cannot be trusted. Not at any level.

(The addenda below, while improving my opinion of Morgs, has not altered my opinion of the game. My feelings for the game – positive as well as negative – remain unchanged.

Your comments here via the support function and on Discord have been duly noted.

Again, we apologise for the slight error in the displayed duration of this event, but as mentioned previously, the countdown was also displayed and showed the remaining time of the event.

I am saddened to hear that a simple oversight such as this has meant we have lost your trust, unfortunately, we are only human and some small mistakes can happen especially during a time of stress such as now given the global pandemic and the fact we are doing our best while working from home and absent from our normal office routines. We do, however, continue to take the utmost care and take attention to detail extremely seriously here at Hunted CowStudios. I am again, very sorry for the confusion of the event and understand why this is frustrating.

We have taken your comments and feedback on board, and have passed this to the team.

If there is anything see we can help with in the future, then please let us know.