This story came about as I walked my dog in the pouring rain and remembered a few news articles recently where refugees had turned up at police stations, asking to be returned home because they are sick of the weather.

You’ll see media articles decrying how we are a Christian country, being overrun by Muslims. A little perspective is needed here. We are a pagan land that was over-run by a bunch of polytheistic Romans. These sun-loving Romans, it is said, thoroughly hated our foul weather and wanted nothing more than to finish their term of service here and return to the warmth of Italy.

The Romans, as their empire failed, were consumed by the monotheistic Christians who set about destroying all the ‘false idols’. Largely, in turn as the centuries passed, these beggers wanted nothing more than to move to the warm bosom of ‘Holy Rome’.

Except, they couldn’t because a bunch of axe-wielding pagans (from equally cold, wet, Scandinavian lands) were over-running the place, raping, pillaging, murdering. Dancing in the rain over the bloody remains of those who called them heathens.

It took a few centuries but eventually, having indoctrinated these, the church set about torturing and murdering everyone left that opposed their (lucrative) reign of terror. It took the best part of a millennium but eventually that sorry, evil regime failed in the end. It probably was raining the day the church lost its tight grip on the nation.

So now we have millions more wanting to ‘invade’ and take over this soggy land. In another thousand years, if any of this is recorded, it will tell how they left in turn.

And it will still be pigging raining here – even as the rest of the world scorches!

In the burning heart of the Sahara a couple of Bedouin decided they’d had enough of the baking sun, the poverty, the thirst, and of sand in their undies… 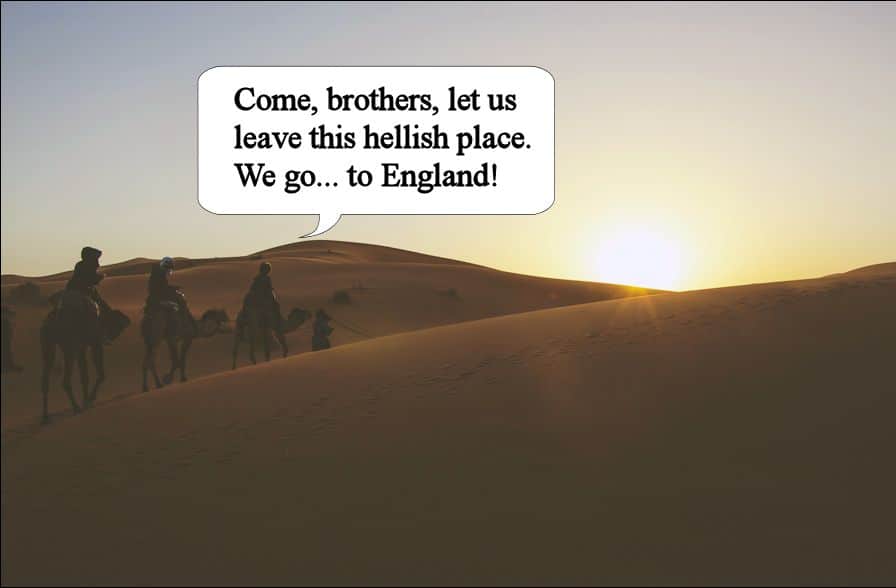 Many weeks later, after a 3,000 miles trek through a score of countries, they park up their camels in Calais and take the ferry to Dover.

It is late summer when they finally arrive at the promised land of Manchester and marvel at the sight of green fields, plants growing everywhere (those are weeds, mate, they do that!), and the feel of rain on their face. 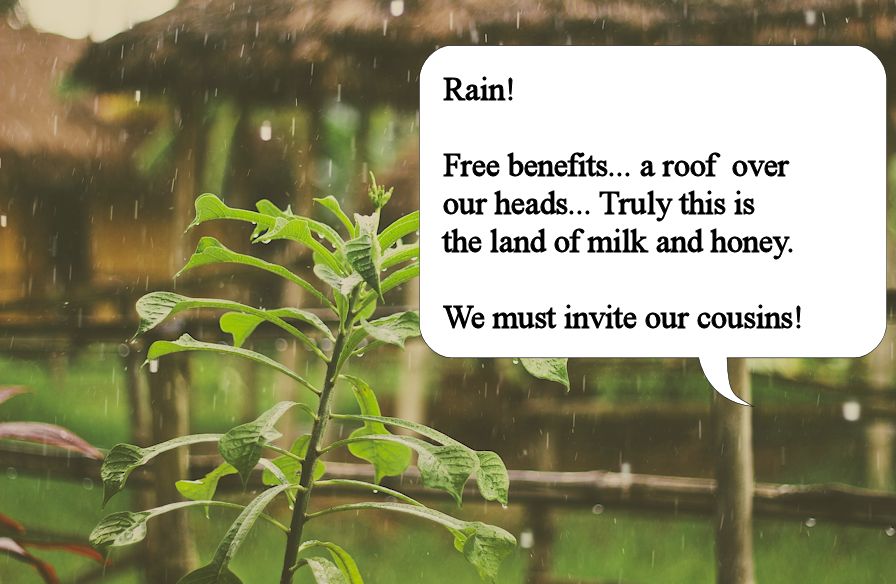 After a while the novelty of anything new can begin to wear off, if repeated often enough. 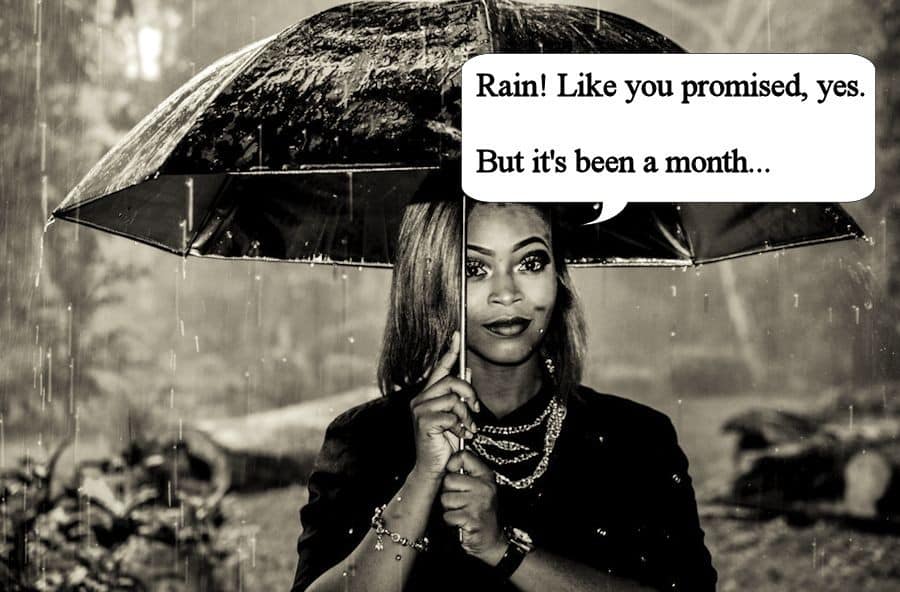 Novelty, when jaded enough, begins to wear thin and turns to annoyance. 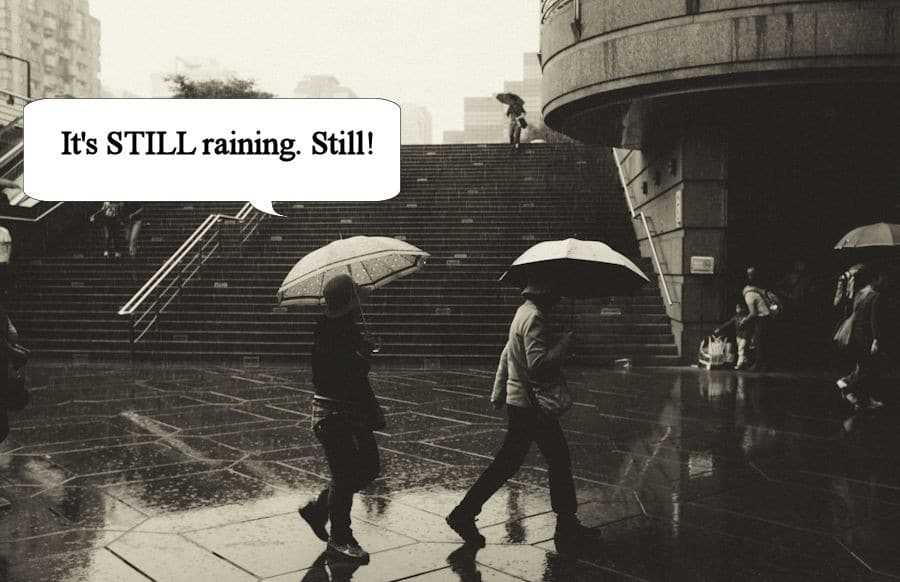 What can do about annoyance in the face of an uncaring, disinterested world, let alone something as fickle as the British weather? 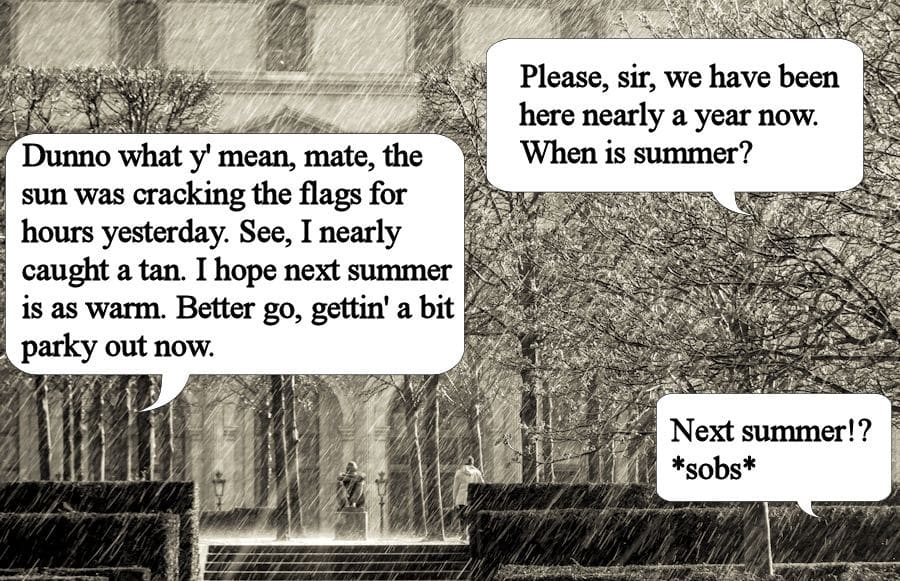 You didn’t ask for war, turmoil or poverty in your lands. We in turn, didn’t force to you come here. It is what it is. Adapt, fit in, or leave. Nothing made or devised by man lasts forever. This includes cults, religions, false gods (which all are!) and oppressive, intolerant and dictatorial cultures. If you are running from something you don’t invite it over the next day! If you can’t dance in the rain, you either accept being wet, or you leave. The clouds don’t care either way. 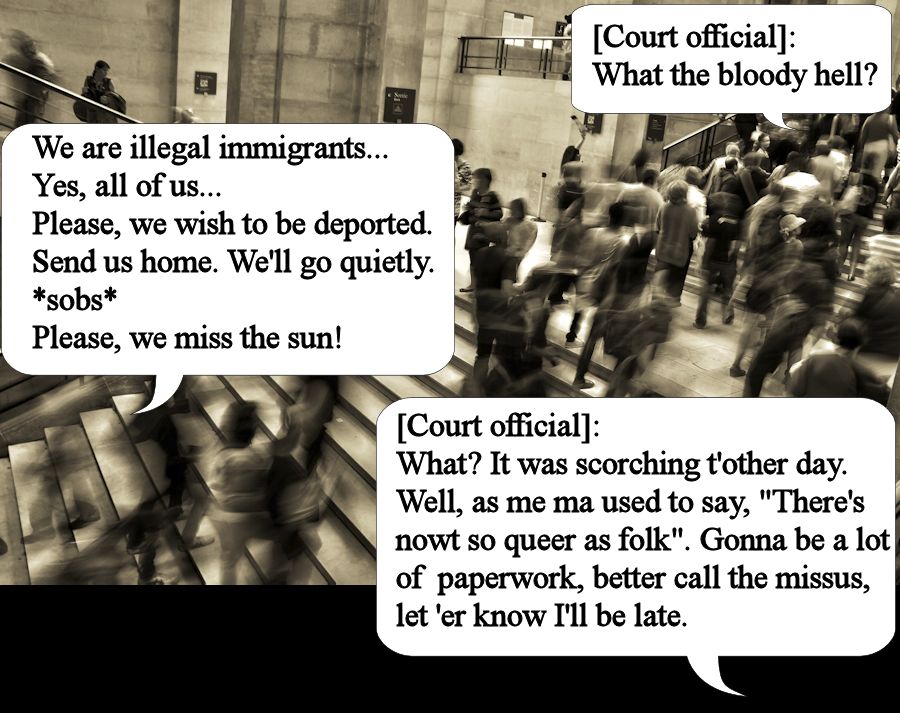 I have posted a shorter, less somber, more humorous version of this on pinterest:
A Refugee’s Tale