There are full guides, so I’m just going to give hints and tips (some might say spoilers) for the bits I reckon will cause the most frustration.

For all the roaming nature, the game is largely linear with few if any really difficult puzzles. The hardest things seem to be of the nature: Where the heck is… ? to which I have generally have the answer, and How do I… ?. If that latter sentence ends in …open that door in the Tower of Sorcery ?, then I have to prod and say I hope you didn’t destroy the golem replication pod! Well, you get the idea.

Essentially, besides a look at random items, I have concentrated on the forge and Tome items, and the henchman quests. I have taken numerous screen grabs of equipment, characters and monsters and I’ll work these in over time.

From all the screen grabs I have so far, this picture of an Umber Hulk attacking is firmly amongst my favourite. 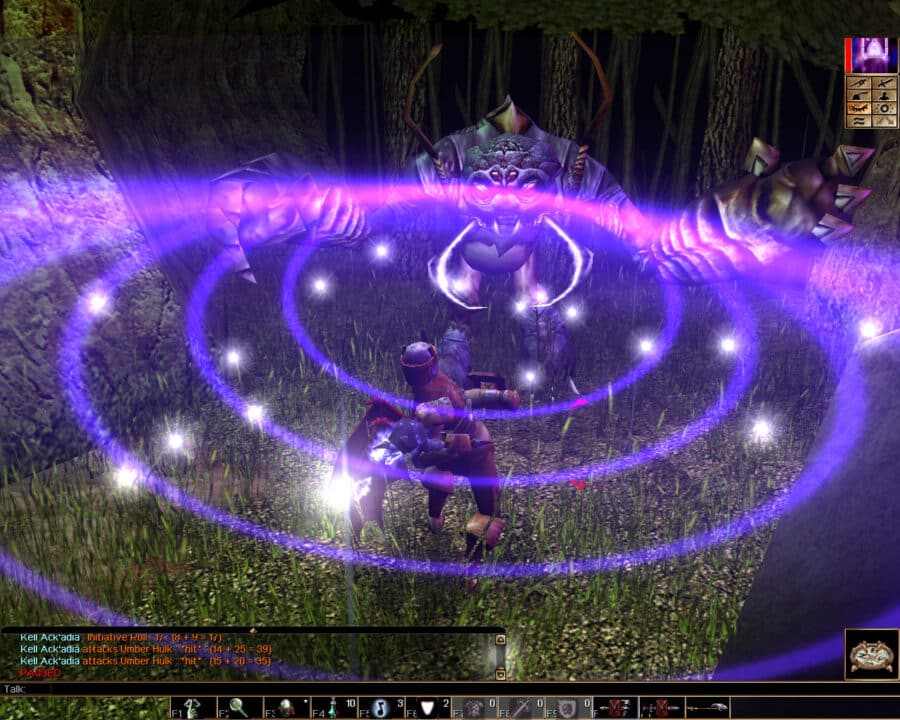 Out of interest, in my opinion the best feature of this epic game is … is …
Let’s have a round of applause folks for everyone’s favourite kobold bard, Deekin: 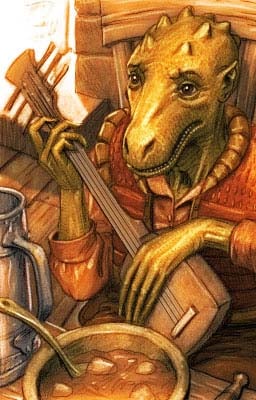 I just know some of you will want to know where I got such a good picture of him. Well, on my travels I found the web site of artist Gareth Hinds who was responsible for this masterpiece, along with several other characterisations from Neverwinter Nights: Shadows of Undrentide.

Update September 2005
OK, All done, though I will replay it again when I get a new soundcard. I’ve drafted up one lot of notes and I’ll get the rest over the next few days. When I’m done I’ll tidy up the unwieldy pages into something far more cohesive.

I will also give Deekin a page of his own, because the little guy is the real hero of the game.

Update August 2005
I took the time to relax and replay this game and the expansions. Working on writing up my notes now.

*sigh*
Still haven’t got round to playing further with this game get, even though I’ve since bought the two expansions. Sooner or later I will finish this solution. I suspect it will old news by them, but I still get enquiries for the Wizardry VII solution I wrote way back in 1992, so it won’t go to waste.

Update August 2004
So much to do. When I get a breather I will carry on playing this excellent game and write a complete guide to it!

Solution wise, I’m still playing and there are a few excellent walkthroughs already like the one
I found at [ RPG-Guide ]
(Addenda, 2013: All gone since then. Guess it has been 8 years, still…)

(They were working it), so I’ll probably not be giving it the full monty, but I will cover the more important bits. I reckons I’ll limit it to the henchman and related quests and the tastier magic items in each chapter. If I don’t you don’t find the answer here, feel free to ask, like as not I’ll remember the answer. 🙂

First off, hardware requirements – it’s a monster! I’m using a Realtek Ti4600 with 512Mb memory and a PIII 733 and it’s still jerky at times, albeit drop dead gorgeous with all the 3D acceleration options turned up to maximum. Soon as I get hold of a new Gigabyte board, I’m upping it to a fast P4.

I’ve not tried the Internet gaming side yet, when I do, I’ll let you know.

First off – explore everywhere thoroughly. And leave save games at regular intervals. There’s a few places you can’t enter a second time and it can beggar things up. I left an axe in one area and couldn’t get back in to retrieve it – it was part of a henchman subquest, one I couldn’t then complete.

On the part of henchmen, not sure if this is a quirk or a bug, though I suspect the latter. It appears that if you don’t complete the quest in the first episode, you can’t get the items later one. For example in the second episode the mad monk wants an embalmed hand. Because I lost the ring he wanted in the first chapter (D’oh) he wouldn’t complete subsequent dialogues. (Regardless of requisite level rises and actually having it in the inventory)

Which leads nicely onto the next bit about treasure. I suggest selling it all in the same place just to be safe. You never know when you might want something back again.

On the subject of treasure, an awful lot of it is in behind locked and trapped chests and a heavy axe won’t always cut it. I took two routes, a Monk with a Thief / Bard companion relying on the Monks reflexes to trigger the traps that couldn’t be undone and a Dwarf fighter / thief with plenty of points thrown at lock picking and insane health. Incidentally, the treasure in the (random) chests may be linked to your class. Thus a mage might get Battle Robes whereas a fighter might get enchanted armour. Certainly the treasure is relative to your level, with noticeable jump points around character levels 11, 14 and 17. I assume therefore it is every 3 levels.