You might have seen this guy. He is so prolific it’s ridiculous! As fast as these accounts are banned he’ll spawn hundreds more, but it gives you an insight into these people. Sadly, but undoubtedly a select few of these are getting very wealthy from scamming the gullible.

There are a number of names this person currently uses – like ‘johngoogle’ ‘jamessunny’ ‘tomesomencoo’ ‘WoukHerman’ and ‘WottonHenry’ among countless others and gibberish names. From the links, the spammers real name may be Lee Caine, or maybe Caine Lee.

The profile image is randomly generated and can be anything from young women bathing to old men fishing, as seen below: 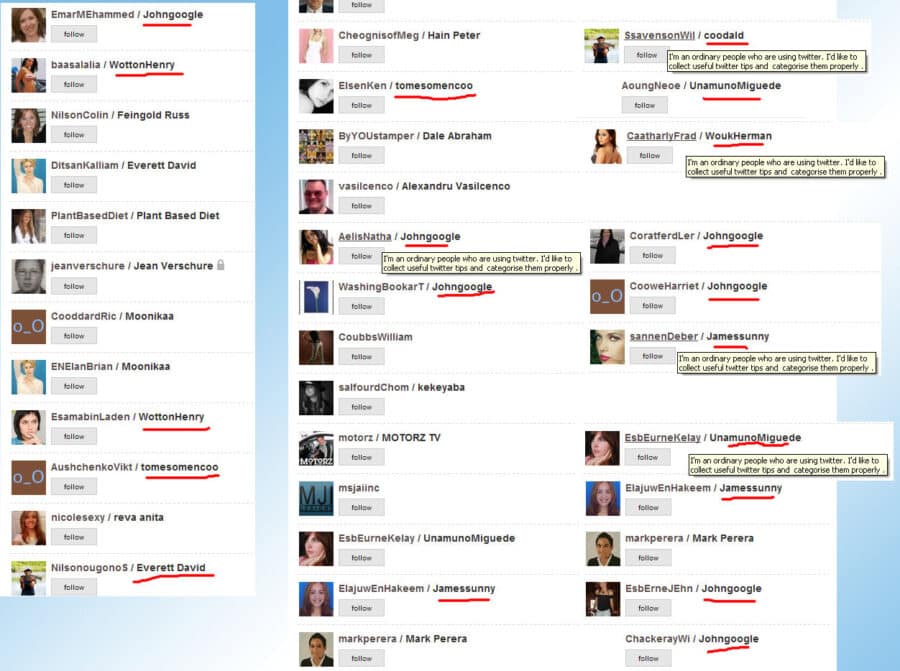 So far all the ones I’ve seen have a bio reading:

Bio I’m an ordinary people who are using twitter. I’d like to collect useful twitter tips and categorise them properly .
(clearly English isn’t his 1st language!)
and point to
Web (http…) twitterfan .info

All his posts obviously being affiliate links.

The content on the twitterinfo site is probably copied (stolen) and, bizarrely half of it seen to be hypocritically slagging off (and at the same time promoting) The Twitter Traffic Machine and Tweetlater. The entire point of this site – and the relentless spam it to push people towards clicking on the adverts at the top of the page – including… 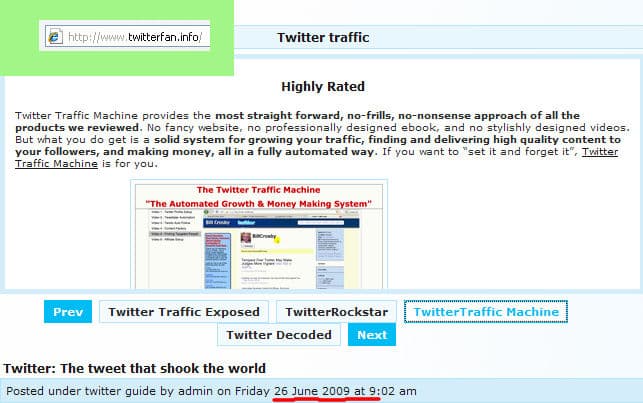 You might also note the date, underlined. This site was probably thrown together specifically for this batch of Twitter account – and they are batches, presumably in lots of a hundred.

By his own words, and I quote: “All lies. All a con. All a scam.” Which gives you an insight into the type of parasite he is as he has rotating banner going to them* so he can get commission on sales! *(Amongst four others, most of whom I also have blocked at the router)

The image below, taken from the site, cynically decries the evil of this pernicious scam – while his affiliate banner advert say how wonderful it is!

Others I have blocked at the router level include the following .com’s: